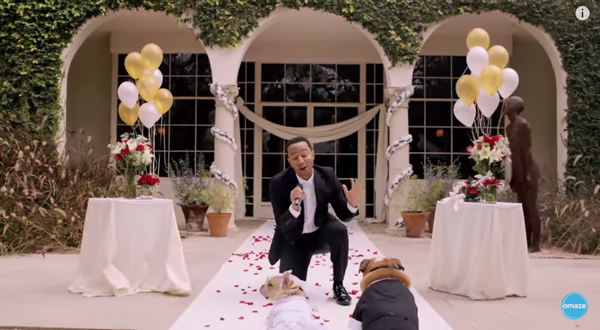 Imagine you’re getting married, and John Legend sings to you and your beloved throughout the day, popping in every now and then with verses of his hit “All of Me.”

You’d be pretty swoon-y, we imagine.

Now imagine you’re John Legend’s Bulldog, and John has dressed you in a tux to get married to his wife’s French Bulldog (in a bridal gown), and he keeps putting his big head in your face, singing that song of his that he always sings around the house while he officiates your “wedding.” God, Dad! Is food at the end of this song?

That’s the reaction of these glorious dogs — Puddy and Pippa — who give the singer patient, sorta-interested looks (“Does he have treats? He has treats, right?”) while Legend belts out his hit song in this expertly done wedding video. When he throws the bouquet, Puddy waddles slowly over for a sniff, hoping it’s a treat, but it’s not. Sigh.

Soon the cake comes out — they are married! — but the dogs can barely manage a lick. To be fair, it looks dry. And it’s probably peach cake or something.

Things perk up during the reception, though, in the photo booth. Everybody loves a photo booth, even these dogs:

Finally, Chrissy Teigen walks in, notices what the heck her husband has been up to all afternoon with their dogs, and drops her Whole Foods bag to go put on a dress. The video is for charity — not a pet charity but The Show Me Campaign, which Legend started in 2007 “to break the cycle of poverty by supporting programs that help to provide every child with a quality education, spreading awareness about the issues, and inspiring citizens to take action,” according to its website.

The cause associated with this fundraising video is toward rebuilding the auditorium at the former South High School in Springfield, OH, and there are eight days remaining. You can enter to win a private Legend show of your own, with entries costing a $10 to $25,000 donation, be it at your birthday party, BBQ, or dog wedding.

This article was originally published by Dogster.com. Read the original article here.
Advertisements